About Viz
Our History

The Story of the Viz Crescent 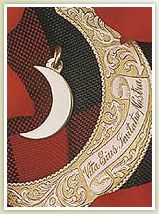 The rich history and tradition of Visitation Academy can be traced back to 1610 when The Order of the Visitation of Holy Mary was founded in Annecy, France, by St. Francis de Sales and St. Jane de Chantal. One of the most enduring symbols of Viz tradition here in St. Louis – the Visitation crescent – dates back even further.

In the mid thirteenth century, Pierre de Sales, an ancestor of St. Francis de Sales, was navigating a ship carrying a fleet of Christian forces through a storm in the Mediterranean Sea when two shooting stars appeared over the deck of his ship. Thanks to Pierre’s nautical skills, the army arrived in time to help secure a victory. As a reward, Pierre was given a coat of arms featuring the twin stars and a gold Saracen crescent.

Many centuries later, one of the founding group of Sisters was inspired by St. Francis de Sales family crest and bestowed a gold crescent on a Viz student. This began the beloved and longstanding tradition of Viz graduates receiving a gold crescent upon graduation.